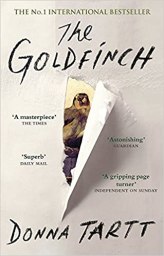 One of the few benefits of living in Covid-19 induced lock-down is that at 5:30 pm each weekday, instead of heading to some homogenous business hotel or crossing the country east to west along the M62 (the only motorway in the UK with a “summit” sign, at 1221 feet above sea level, the highest point on the motorway network), I can switch off my computer and…I’m home and free, with more time to read, think, or even just sit and look out of the window.

It was gazing into the garden that made me realise how many different types of birds visit to peck in the grass or hop around the wall. I’d seen birds there, of course: seagulls nesting between the chimney pots, pigeons strutting their stuff, magpies, perhaps even an occasional blackbird or robin.  But I came to notice others that appeared more fleetingly and, I confess, couldn’t always name without Googling them: wrens, starlings, goldfinches.

The goldfinch is a particularly colourful bird with its red face and yellow wing patches – the kind of bird that you might want to paint, say. Which is exactly what Dutch artist Carel Fabritius did in 1654 and it is his life-size painting, measuring a mere 13” x 9”, which inspired Donna Tartt’s Pulitzer Prize winning novel The Goldfinch.

(If you fancy a bit of literary tourism, Fabritius’s painting forms part of the collection at the Mauritshuis art museum, The Hague, which also boasts Johannes Vermeer’s Girl with a Pearl Earring, the painting which inspired the Tracey Chevalier novel.)

Theo Decker, aged 13, sees The Goldfinch with his mother at an exhibition in New York. When they separate momentarily there’s an explosion; his mother is killed but Theo escapes, taking the painting with him.

The action of the novel, narrated by Theo, unfolds over the next decade as his life is increasingly dominated by the ‘lost’ painting. Theo is ostensibly not a nice young man: he’s a thief, con-artist, drug addict, love-cheat. Tartt still manages to make him essentially sympathetic and likeable somehow.

The story – which runs to a whopping 864 pages in my Abacus paperback copy – ends with a new, changed Theo, trying to put right the things he’s done wrong and contemplating how “we don’t get to choose the people we are”. Fabritius’s tethered goldfinch, its “refusal to pull back” from the world, speaks to Theo “across time”, teaching him that “life…is short…cruel…even if we’re not always so glad to be here, it’s our task to immerse ourselves anyway: wade straight through it, right through the cesspool, while keeping eyes and hearts open…it is a glory and a privilege to love what Death doesn’t touch”.

Don’t be put off by the length of the book (more bang for your buck!). The Goldfinch is a novel that’s worth making time to read.

I can also recommend Tartt’s novel The Secret History (a mere 629 pages in Penguin paperback), which I reviewed in an earlier blog post – just click the link.