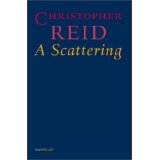 When someone we love dies we experience grief in four distinct stages.  So it’s probably no coincidence that Reid’s poetry collection A Scattering, inspired by his wife’s illness and death, is in four parts.

The first part, The Flowers of Crete, is concerned with a holiday during her final illness.  However it is his wife’s essential energy and vitality that Reid portrays.  She is ‘sublime’, ‘willing to climb/ the rockiest, thorniest slope,’  ‘intrepid.’  He is in denial, not fully able to believe that, unlike the Cretan Minotaur, her ‘skulking sarcoma’ cannot be killed.

The second part, The Unfinished, begins with his wife’s death: ‘Sparse breaths, then none – /and it was done.’  The rest of this sequence covers ‘Those last few days/ of drug-dowse, coma-comfort,’ and Reid doesn’t shrink from sharing the effects of his wife’s ‘malignant but not malign’ brain tumour: paralysis, fits, drugs, memory loss, hair loss.

The third part, A Widows Dozen, is a sequence of thirteen poems, including the title poem of the collection.  A Scattering recalls how elephants scatter the bones of their dead and Reid invokes them as his muse ‘may their spirit guide me as I place/ my own sad thoughts in new, hopeful arrangements.’  Elephants (so the saying goes) never forget and the sequence takes us through a range of emotions – sadness, anxiety, guilt, anger – at times expressed with devastating simplicity.  ‘Please explain tears,’ Reid demands in A Reasonable Thing to Ask. In Turns, imagining he hears his wife’s voice, Reid states flatly ‘I know she’s dead and I don’t believe in ghosts.’  The final poem in this sequence, Afterlife, sees Reid outside the hospital where his wife’s body had been donated to medical science. ‘But it’s not a graveyard, to dawdle and remember and mope in,/ and I had work to do, too, in a different part of town.’  His physical movement suggests his emotional state; a ‘moving on’ that is metaphorical as well as literal. Reid is gradually coming to terms with his loss.

The final part, Lucinda’s Way is a ‘necessary footnote’. Reid’s sense of loss is still evident (‘I live in a memory/ the size and shape of a house’) but unlike in A Widower’s Dozen where he perceives the flowers to be ‘missing the welcome and blessing/ of the one who had planted them there,’ in this section he says of the garden ‘you’re still to be found there/ if I look carefully.’ Here is acceptance; recovery.  Reid is no longer ‘inhabitant/ of an empty house,’ but of a home where ‘the innumerable air kisses/ we exchanged in passing/ remain suspended to this day, /each one an efficacious blessing.’  It is fitting that the collection ends with this benediction.

A Scattering is a brave and intensely personal collection: an extended love poem, a cathartic outpouring, an arc of grief.  But there are moments when it becomes too glib for its own good. Turns ends with the line ‘A variety turn – that never fails to give me a turn’; Exasperated Piety transmutes Henry James’ ‘a terrible place to die in’ to ‘a terrible place to cry in.’ The punning jars with the overall sentiment.  But the collection won the overall Costa Book Award in 2009 for all that.