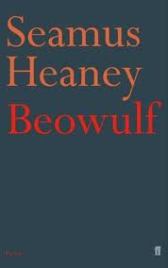 I have an uncle who fancies himself as well-read – with some justification, I’ll admit.  I studied English Language and Literature at a good university, and had to learn Anglo-Saxon to read the Anglo-Saxon chronicle in the original, but graduating without even opening Beowulf? That left him underwhelmed.  Heaney’s translation, which won the Whitbread Book of the Year in 1999, was my chance to fill the gap.

Though I’m not ‘big’ on poetry, I’ve enjoyed Heaney’s work since university (we did study him, at least).

“I consider Beowulf to be part of my voice-right” writes Heaney in part 2 of the Introduction, About This Translation.  And sure enough his “enabling note” into this Old English poem, composed sometime between the middle of the seventh and the end of the tenth century, is “a familiar local voice, one that belonged to the relatives of my father.”

The poem opens with the word “Hwaet” usually translated as ‘lo’, ‘hark,’ or ‘listen.’  Heaney translates it as simply: “So.”  So…that’s how my relatives start a story, too, and my friends, and pretty much most people know.  So…he hooked me from the first word and this “attractively direct” voice is a right of way into the text. So…this is our first English epic poem and it deserves to be held closer to our cultural heart.