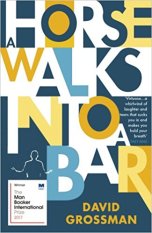 My project for over the Christmas holidays was to sort through my old photographs. It was fun to do but also a little sad. Girls at school, girls at Guide camp, a barbeque on the beach with the boys from the Catholic Youth Service, the fun of the fair with a church music group, an ex-boyfriend, then another, university friends, my first work’s Christmas party – to think I’ve known and let go of so many people!

Now imagine tracing someone from each lost group and inviting them to a comedy show where you’re the comedian.  And then you tell your ‘captive’ audience, not jokes, but a previously untold story about a central trauma in your life.

This is the premise of Grossman’s novel A Horse Walks into a Bar, winner of the 2017 Man Booker International Prize.

At this point I have a couple of confessions of my own to make. I bought Grossman’s novel because of a misunderstanding, thinking it had won the Booker Prize itself. (That accolade went to Lincoln in the Bardo by George Saunders, which I have since acquired and now forms part of my burgeoning ‘to read’ book pile.) Until then I hadn’t known there was such a thing as the International Prize, possibly because it’s a relatively recent phenomenon on the Booker-scene.

And I nearly abandoned Grossman’s book barely thirty pages in (and might have done, too, if I hadn’t been waiting on Father Christmas to deliver me some lovely, fresh books). There’re only so many times you can read “Gooood eeeevening Netanya!” or something like it, without it starting to grate.

But sometimes things are meant to happen. Without a misunderstanding and an accident of timing I would have missed out on what turned out to be a compelling read – the way you feel compelled to watch the aftermath of an accident.  As his horrified audience looks on or leaves, the comic Dovelah G moves from ‘good old slapstick’ to shocking, physical violence.  It’s raw, it’s real. And Grossman’s prose is as finely-tuned as his narrative. His imagery is so packed with meaning, ‘unswept time piles over them’ is just one example, is worthy of an essay all to itself.

Btw the Man Booker International Prize was first awarded in 2005 as a bi-annual award not to a book but to an author for a body of work, like the Nobel Prize to Literature.  In 2016 it changed to become an annual book award.  The Booker Prize has been going since 1969.