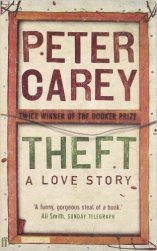 It’s 1 January 2017 when I’m writing this (Happy New Year!) although I actually read Theft in summer 2016.  Life, in the guise of renovating a house, then moving house, then a significant birthday, then making good the old house, conspired to get in the way of book reviews.

I acquired Theft from my hubby, in the sense that I rescued it when he’d ear-marked it for the charity box; he said it was too annoying to finish.  Having read Peter Carey before (True History of the Kelly Gang, The Tax Inspector, Oscar and Lucinda, My Life As a Fake) I decided to give it a whirl.

Michael Boone, a no-longer fashionable artist, is unpaid caretaker of a hard-to-sell property, 300 miles from Sidney, where he lives with his ‘slow’ brother Hugh.  Then Marlene Leibovitz appears.  Her estranged husband, Olivier, is the youngest son of the dead painter Jaques Leibovitz. Leibovitz’s art is highly collectible and extremely valuable and Olivier has the legal right to endorse a painting as genuine. Gradually Marlene and Michael (aka Butcher) hatch an ingenious plan to fake the famous lost Leibovitz, Le Golem Electrique.

The story is narrated alternately by Butcher and by Hugh.  It was Hugh’s narration that had irritated hubby.  But by making a conscious effort to read Hugh’s sections at half my usual pace (his nickname is ‘Slow Bones’, after all) I found them to be the most touching and beautiful parts of the book.  Hugh, the ‘idiot savant’, frequently seeing and understanding more than his clever brother, endeared himself to me almost right away.  It was Butcher, selfish, embittered, and self-obsessed, that I struggled to connect with.

At times I had to work to keep up with the complexities of the plot – nothing wrong with that!  Carey had clearly done his research because the mechanics of making a work of art were described in rich detail. And the ending was delightfully unexpected yet seemingly inevitable, in other words, very satisfying.

Overall, though, not warming to Butcher took the shine off the book. And five months on from reading it I had to read the blurb at the back to remember anything (and I mean anything) about the characters or story.

If you haven’t read Peter Carey before, try his Booker prize winning True History of the Kelly Gang. If you’re a Carey fan, this is worth reading – and if, unlike hubby and me, you can find a way to empathise with both Bucher and Hugh, it’ll probably be one of the best books you’ll read this year!