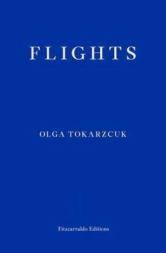 Six years ago I visited the Bodies Revealed exhibition when it came to Liverpool.  In case you haven’t heard of it, this is an exhibition of real human bodies that have been preserved using silicone rubber, a process known as plastination.  The bodies are dissected and put in dynamic poses so you get the chance to look at organs, muscles, bones, nerves, blood vessels – you name it, you can see it.  If you can get past the undeniably macabre aspect to the show and overlook the moral and ethical concerns (one of the friends I went with was particularly upset by the jars of foetuses at various stages of development), it’s a thoroughly absorbing experience.

Flights contains a “pilgrimage” to a similar exhibition, the culmination of a bizarre thread of anatomical stories running through Tokarczuk’s novel: from the 18th century there’s Angel Solomon, the African slave who rose in Venetian society and whose body was stuffed and exhibited after his death; from the 17th century, anatomists Filip Verheyen and Frederick Ruysh, the former dissecting and studying his own amputated leg, the latter selling his collection of anatomical specimens to Peter the Great for 30,000 guilders  (roughly £250,000 in today’s money); from the 19th, Chopin, whose heart was removed after his death and smuggled from Paris to his native Warsaw for burial.

There are also present-day stories: Kuniki, from Poland, whose wife and son go missing on a family holiday on the Croatian island of Vis; angry Eryk, ex merchant sailor, now working for a small ferry company; Dr Blau, specialist in anatomical history and tissue preservation, who likes photographing vaginas; Annushka, a young mother running away from her husband and sick child; the Polish woman who travels across the world to visit a dying man who’d been her boyfriend for two years, thirty years ago.

And there’s the chance encounters with fellow travellers at airports, on coaches and trains; snippets of information (“in a city in South Asia the vegetarian restaurants are generally indicated with red swastikas, ancient signs of the Sun and life force”); interesting observations; deft imagery.

If this makes Flights sound like a hotchpotch, well, that’s because it is. “Sometimes a figure carves itself out of the crowd, and then I deviate from my itinerary to follow it for a moment, share its story.” For much like the exhibits in Bodies Revealed, whose meaning doesn’t extend beyond their physicality, in Flights the written word seems to be the end itself.  “We will simply write each other down, which is the safest form of communication and of transit; we will reciprocally transform each other into letters and initials, immortalize each other, plastinate each other, submerge each other in formaldehyde phrases and pages.”

Tokarczuk, according to the inside jacket, is one of Poland’s best and most beloved writers, and Flights won the 2018 Man Booker International Prize.  But at the risk of seeming a philistine, this book struck me as more like a collection of short stories and miscellany than a novel.  Although undoubtedly interesting in parts, the thread running through it wasn’t sufficiently strong to hold my attention from one day to the next; I’d go so far as saying that you’d probably get almost as much out of it by opening and reading pages at random, the way you would a book of interesting facts.  Now I come to think of it, maybe that’s the point?