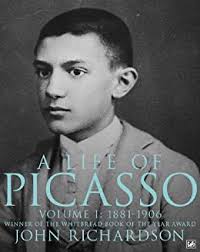 Even if you know nothing much about art (like me) and you hear the name Leonardo de Vinci, Van Gogh, and Munch, then I bet you’ll immediately think of the paintings just listed. If you think a bit longer and harder, of course, you might come up with some others, The Last Supper, say, or that drawing of a man (Vitruvian Man – I had to Google the title), and…didn’t Van Gogh do a self portrait, and a cafe scene, and, erm…wasn’t there more than one version of the Scream?

You get the point. Mona Lisa et al are so deeply entrenched in the popular mind, that the paintings have become synonymous with their artists. Hubby and I are lucky enough to have viewed all three, and a large part of the thrill of seeing them derives from that fact.

So, which painting immediately springs to mind when you hear the name Picasso?

Hubby and I genuinely couldn’t think. After we’d looked up images online, I remembered The Dream, if only because as a young, skint newlywed I’d bought a framed print of it from the budget store What Everyone Wants.  (I’d bought a print of Van Gogh’s The Chair at the same time – both prints were cheap, bad, and consigned to the charity shop before a house move).   Other images seemed familiar and were recognisably ‘Picasso’ but we couldn’t name them, and we certainly couldn’t agree on any painting as undisputedly THE ONE, which is strange when you think about it, because Picasso is such an iconic artist.

Perhaps the explanation is to be found in John Richardson’s prize-winning biography, which was Whitbread book of the year in 1991. For starters, Picasso was incredibly prolific, producing an estimated 50,000 artworks.  And he seems to have named works only rarely, with titles conferred afterwards, mainly by dealers or exhibitors.

At this point I should confess to being neither a fan of the biography genre, nor a student of modern art.  Given those hurdles, Richardson’s book was engaging enough.  I liked reading about Picasso’s childhood, was interested in the analysis of his work, and gained some knowledge of his early ‘blue’ and ‘rose’ periods.  The desperate poverty he endured as a young man trying to make a living in Paris – it turns out the romantic notion of an artist starving in a garret isn’t actually so far from the truth – gives some insight into his breath-taking drive, ambition and self-belief.

However Richardson’s meticulous attention to detail and objectivity, which undoubtedly make this a magisterial biography, ultimately proved to be drawbacks for a casual reader, like me. This is an extremely hefty book, and the twenty-something Picasso, on the cusp of breaking-through as an artist, is not shaping up to be all that nice a man; so although I don’t regret reading Volume 1, I’m simply not interested enough to reach for Volume 2.^

Rating: * Worth a try but not for me.