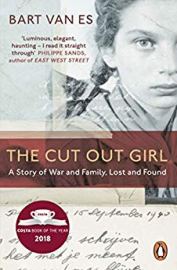 ‘Without families you don’t get stories.’

At the time of writing I’m on holiday on Corfu. In normal life my brain is chock-full of jobs-to-do but on holiday I have time to think, which isn’t always a good thing.  One night (admittedly after several glasses of the local wine) I got upset about not having children, about my sister and brother not having children.  Hubby put his arm around me and asked what the matter was. ‘Without children,’ I sobbed, ‘the stories will die. Granddad, Uncle Bobbie…everyone will be forgotten.’

It’s telling that my thoughts were only of my mother’s side of the family.  My paternal grandfather was lost at sea in World War I and his wife died a few years afterwards. My father, aged six, was sent to a Dr Barnardo’s orphanage, separated from his siblings. The only story I remember from his childhood was how he tried to run back home – no-one had taken the time to explain what was happening – and when he was caught and brought back, he was told he was a naughty boy and his mother had died of grief. (He assumed there was a causal connection and that he was somehow to blame for his mother’s death.)  Then they sent him to another Dr Barnardo’s orphanage many miles from where he’d grown up so he’d have nowhere to run to.  And that’s where the childhood stories of stopped.

There is a similar gap in the childhood memories of Lien, the ‘Cut Out Girl’ of Van Es’s biography.  We’re in The Hague, August 1942. Holland has been under Nazi occupation for just over two years, and during that time things have slowly started to change for Lien: she is removed from her mixed-religion school and enrolled into an all-Jewish one; she has a carefully stitched yellow star reading ‘Jew’ on each item of clothing. Finally, the biggest change of all: aged only eight she is sent away by her parents to an unknown family in Dordrecht, where ‘she must not say anything about Mamma or Pappa or family. She is not to be Jewish now, just a normal girl from Rotterdam whose parents have been killed in the bombing.’  She becomes one of the many Jewish children ‘in hiding’, taken in by non-Jewish families to try to save them from the death camps.

Lien is brought into the care of the author’s grandparent’s, Henk van Es and his wife Jannigjke. She is moved on several times – ‘after all those months in the half-life, Lien did not really see other people, even if they were there, because she had no connection with them.  As a result of her isolation, she stopped seeing the world.’ – but returns to live with the van Es’s when the war ends, her family having died in Auschwitz.

If you’ve read my previous blog posts, you’ll know that I’m not a big fan of biography and for this book it was a double whammy because the subject-matter didn’t really appeal either. (Would it be too harrowing? Too mawkish?) If The Cut Out Girl hadn’t won the Costa Book of the Year Award in 2018, no way would it have made my reading list.

My misgivings were misplaced. What marks this out from other biographies I’ve read is that Van Es makes his research visible.  He takes us with him as he visits Lien in her current home in Amsterdam, on his trips to the places of her childhood, the record offices, the memorials. In telling Lien’s ‘complex and interesting story’ he also aims ‘to write something that traces this invisible link between Holland’s past and its present’.  There are certainly some unpleasant surprises.  Who would have guessed that The Netherlands as a country was so efficient at rounding up its Jewish population, the death rate there was the highest in Europe, higher even than in Germany?

Perhaps the most unexpected and personal aspect of this book is the parallel van Es draws between ‘the badly damaged twelve-year old Lien’ and his own stepdaughter, Josie, at the same age, ‘fractious, cut-out, and difficult.’  When Lien is in her fifties, Jannike van Es, the woman she has considered her ‘Ma’ for decades, sends her a letter signed ‘Mrs van Es’ and cuts her out of the family. Van Es asks: ‘Could I have sent Josie such a letter?’ It is brave and honest of him to admit the possibility that ‘the two of us could have lost each other’. Uncovering Lien’s story is giving him pause to reflect. ‘For the first time I have seen someone else from the inside from their earliest stages in their life. I have also seen myself as another person, my grandmother…in some of her mistakes.’

When Lien introduces van Es to her friends as her ‘nephew’ it confirms ‘the healing of a breach’. I won’t lie, it brought a lump to my throat.

Has The Cut Out Girl made me a biography-convert? No, not really. Because this book is as much about families as it is about a life, which is why it spoke to me so clearly. ‘Families are not straightforward – there will always be sorrows – but families also give us the most powerful love.’

One thought on “The Cut Out Girl by Bart Van Es”